The battle started with Siders all over Southampton with some elegant passing come up the pitch from the Brilliant Becca, Terrific Tabbs and Victorious Vicky, they worked together like a well-oiled machine running rings around the midfield and beating the sturdy defence Southampton had in place, whilst Keen Katie and Clumsy Chelcey had snuck behind enemy lines for their opportunity to strike. The Mighty Siders had many opportunities to place ball in the enemy’s goal, but Southampton had a well-trained black belt ninja keeping the team from doing so.

Southampton also had their opportunities to strike against the Siders playing down the middle of the battle field but the Enthusiastic Emma and Courageous Coolio stood strong as shields “they shall not pass” then relighting the flame of attack. Southampton eventually managed to find their way though the siders defensive shields but not to fear the defensive line of Dangerous Doc, Noble Nat, and Heroic Hannah where there to fight off the intruders. BUT THEN something happened there was confusion and the Southampton warriors were granted by the battle umpire a penalty flick. The Siders called upon their very own Ninja, the Trustworthy Tina, who protect her goal perfectly “not today Southampton”

At half time both tribes of warriors stopped and put down their fighting sticks to enjoy some refreshing oranges and have a little chat. The siders where given a battle talk by their wise adviser Linda before she trotted off to battles afar.

Back on the battle ground the Amazing Abs and Lovely Lou had their opportunities to take on the Southampton ninja and came very close again. Then eventually Clumsy Chelcey sacrificed her own skin in a dive to secure the first goal and put the Siders in the wining position, blood had been shed but it was for a worthy cause. Southampton did not like this and they charged towards the siders goal again, this time Jolly Jude and Excellent Est had began their shift in defence and where not having any of it, Jolly Jude snatching the ball passing to the Excellent Est who began the return attack, though the ever hard working midfield troop, to the Keen Katie, who made the most incredible pass through the Southampton D, Clumsy Chelcey did some kind of break dance move over the pass in order to distract the defence and the Victorious Vicky lived up to her name by planting the ball in the goal to earn her first battle point of the season *and the crowd goes wild*

By this time the Mighty Siders had fought tirelessly the Dangerous Doc had fallen, who knew you needed more legs to contest in a battle, and the rest of the Tribe were feeling the effect, the Brilliant Becca need a few moments to recharge so lay down for a bit but got back to it very quick. The Southampton warriors where feeling determined a really really wanted a goal, they pounded the defence numerous times each time one of, Noble Nat, Heroic Hannah, Jolly Jude and Excellent Est (whoever was there they were all AMAZING) cleared the battle line and fired the cannons back up into the enemy’s half. But one intruder was sneaky sneaky and made it passed the defences and cheekily put the ball in the net, Trustworthy Tina was an inch from getting it. But it didn’t matter anyway as the trumpets sounded to end the battle the Mighty Siders had valiantly protected their 4 the place crown.

Yayyyyy Dilly Dilly.
And then they all had sausages! 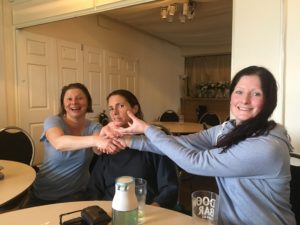